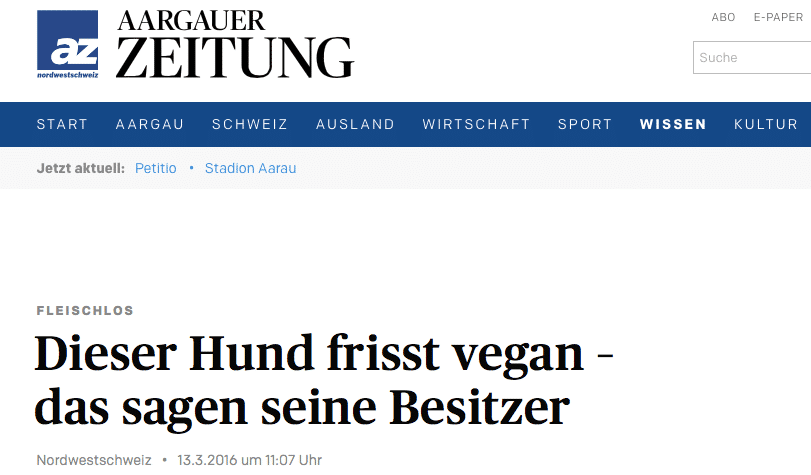 Veterinarian Roland Maurer knows how to do it

Recently I had written about an article in Tier-im-Fokus about vegan dog nutrition.

Now there is another article about vegan dog nutrition, this time in the Aargauer Zeitung. It‘s nice that in this newspaper not only pet owners are reached with the topic. Julia Stucki and her Border Collie hybrid Nardo are featured. Julia has been cooking vegan for Nardo for 4 years. She reports about the positive developments since then: The dog no longer smells of this typical dog smell, but much better. I can also confirm this with Eddie. Also the bad breath is gone.

Roland Maurer, a veterinarian from Bern, who was interviewed at Tier-im-Fokus, also has his say. He advises interested people to the topic of vegan dog nutrition.

Anette Liesegang, Professor of Animal Nutrition at the University of Zurich, explains that although it is possible to feed a dog vegan, she advises against it because it is unnatural and imposed. She argues that soy must be imported as a protein substitute for meat because it does not grow here and the environment suffers as a result. She seems to forget that soya is a staple feed in livestock breeding, so much more resources are consumed, because in order to produce the meat, in addition to soya, huge amounts of water are needed. Furthermore, soya is also cultivated in Austria and Germany and there are many other sources of protein besides soya, which are cultivated nearby, such as lentils, beans and peas.

Click here for the article at the Aargauer Zeitung.